Coming out as transgender was one of the scariest steps in my life because of the unknowns that followed. Through my harrowing experiences I have learned one important mantra:

“Friends and family come and go, the only person you have to live with for the rest of your life . . . is you. Take care of yourself, honor your truths and follow your gut.”

I continue to use this mantra to keep me going through the hardships that life presents us.

As a child I would go out and wish on the stars that I would turn into a boy. I let go of that fantasy, at age 12, when my puberty kicked into full gear and my body went from an androgynous being to a more female form.

When I went to college, my struggles with my female form and my discomfort during social situations led me to my struggle with anorexia nervosa. After five years of struggling with this severe eating disorder, I faced my shadows and came out as “gay” (I didn’t like to use the word, “lesbian”). Within a month of coming out, I began to date someone. I spent the rest of the year coming out to friends and family, but each time I said the word “gay” I felt more uncomfortable in my own skin.

In December of 2004, my girlfriend and I were combing through the bookshelves at Calamus Bookstore in Boston, MA. I purposefully bypassed the gay and lesbian shelves and moved into the transgender/transsexual section. It was there that I found the book Body Alchemy by Loren Cameron. My hands shook and a smile grew inch-by-inch as I flipped through the pages and looked at the pictures and stories of female-to-male transsexuals. Unfortunately, my excitement wasn’t shared by my girlfriend who simply looked over my shoulder, scrunched her nose and said, “You don’t want to look like them do you?”

By the end of her question, my hands stopped shaking and my smile disappeared. I knew what I wanted, what I connected with, wasn’t something she would accept. When we returned home I began to research transitioning. I did this mainly through online personal web sites and support groups hosted by Yahoo. I spent three solid months reading everything I could before deciding to begin my transition.

I came out to my girlfriend in person, then my brother via email, and finally my parents through a seven-page letter which discussed my feelings as a child toward my body and gender, my struggles with an eating disorder in college, and how my six years in therapy finally opened me up to exploring what was underneath my skin.

After coming out, my brother was accepting but scared for me, my girlfriend was hesitant about our relationship (which can be seen in the documentary, Gender Rebel), my dad wouldn’t talk to me for six months and my mom would talk to me on the phone, but tell me it was just a phase and I needed to slow down.

I refused to slow down, instead I continued to make myself available to my parents with the hope they would talk with me. With all the external pressures I felt from my girlfriend and parents, I refused to back down from my identity and what I knew I needed to do.

Below is an 8-year documentation of the changes my facial structure has gone through from the use of testosterone (hormone therapy). 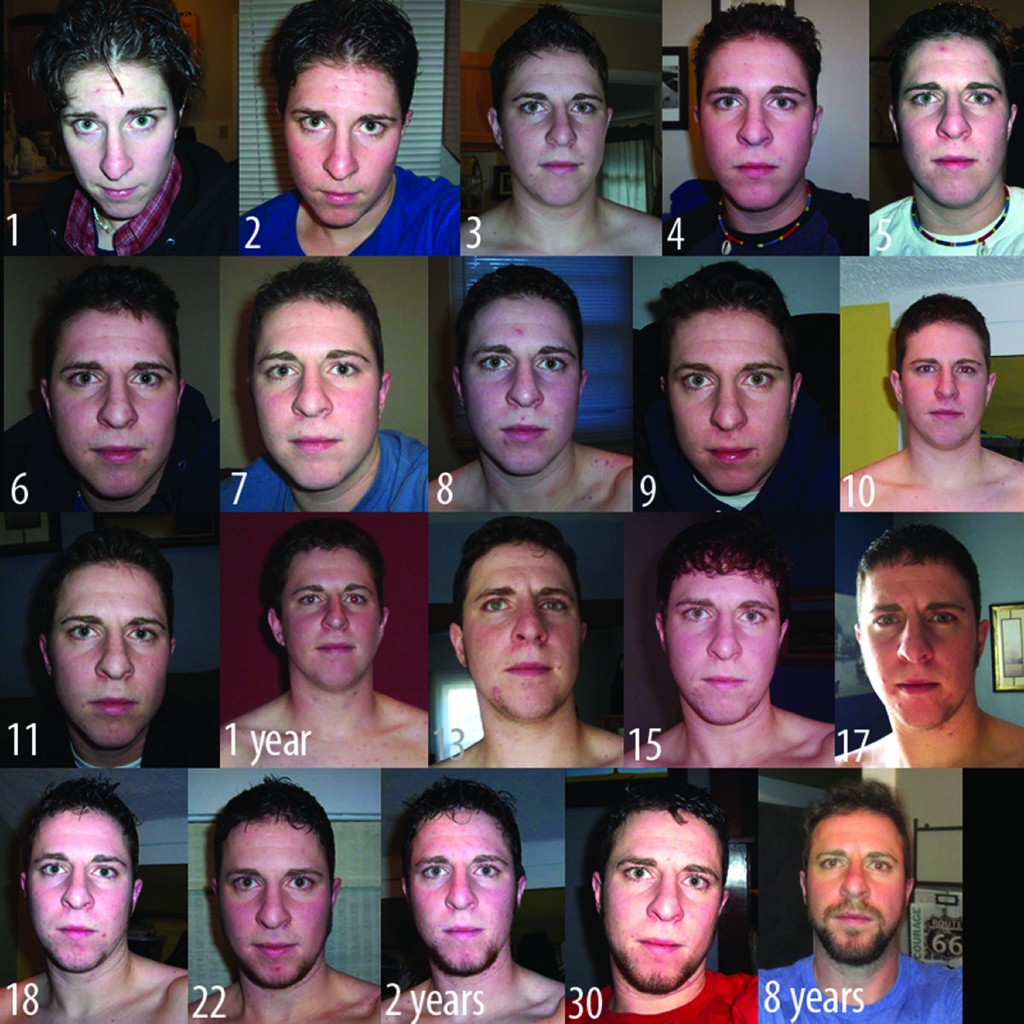