Ryan Sallans, MA is an inspirational transgender speaker and author who specializes in inclusion, diversity, and healthcare. For the past 20 years, Ryan has worked in the fields of eating disorder recovery, sexual orientation, and gender identity development. His growing body of texts and teachings assist corporations, healthcare institutions, federal agencies, universities, and communities.

An internationally utilized gender subject matter expert, Ryan specializes in building inclusive environments and trauma-informed care for students, patients, employees and clients. His unique approach uses the craft of storytelling, guided by his academic degrees and experiences in cultural anthropology, English and educational psychology. Ryan’s stories help audiences understand how to communicate and build better relationships with each other, while also learning a little bit more about themselves.

Since his own transition from female to male, which began in May of 2005 in Lincoln, Nebraska, Ryan’s story and work has reached people worldwide through his websites, books, articles, speaking engagements, and interviews. He’s appeared on radio, podcasts, magazines, newspapers, and mainstream television – the documentary Gender Rebel, Larry King Live, Ricki: The New Ricki Lake Show, Trisha and Cheddar TV.

Ryan Sallans (in blue Tshirt) with his brother Greg

In-Person and Virtual Events for 2023!

In this clip, Ryan addresses an audience of 1200 federal employees where he speaks to why we need inclusive environments for LGBTQ employees, and what he feels prevents policies from moving forward. This keynote was part of the opening plenary. 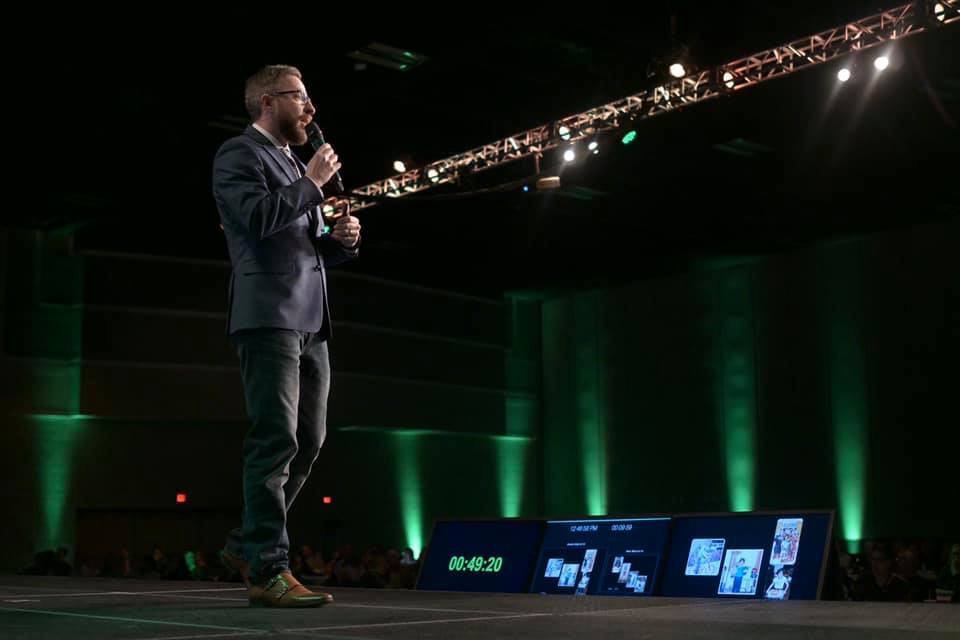 Inspirational transgender speaker and author on self confidence for corporate entertainment, staff development, or custom keynotes. 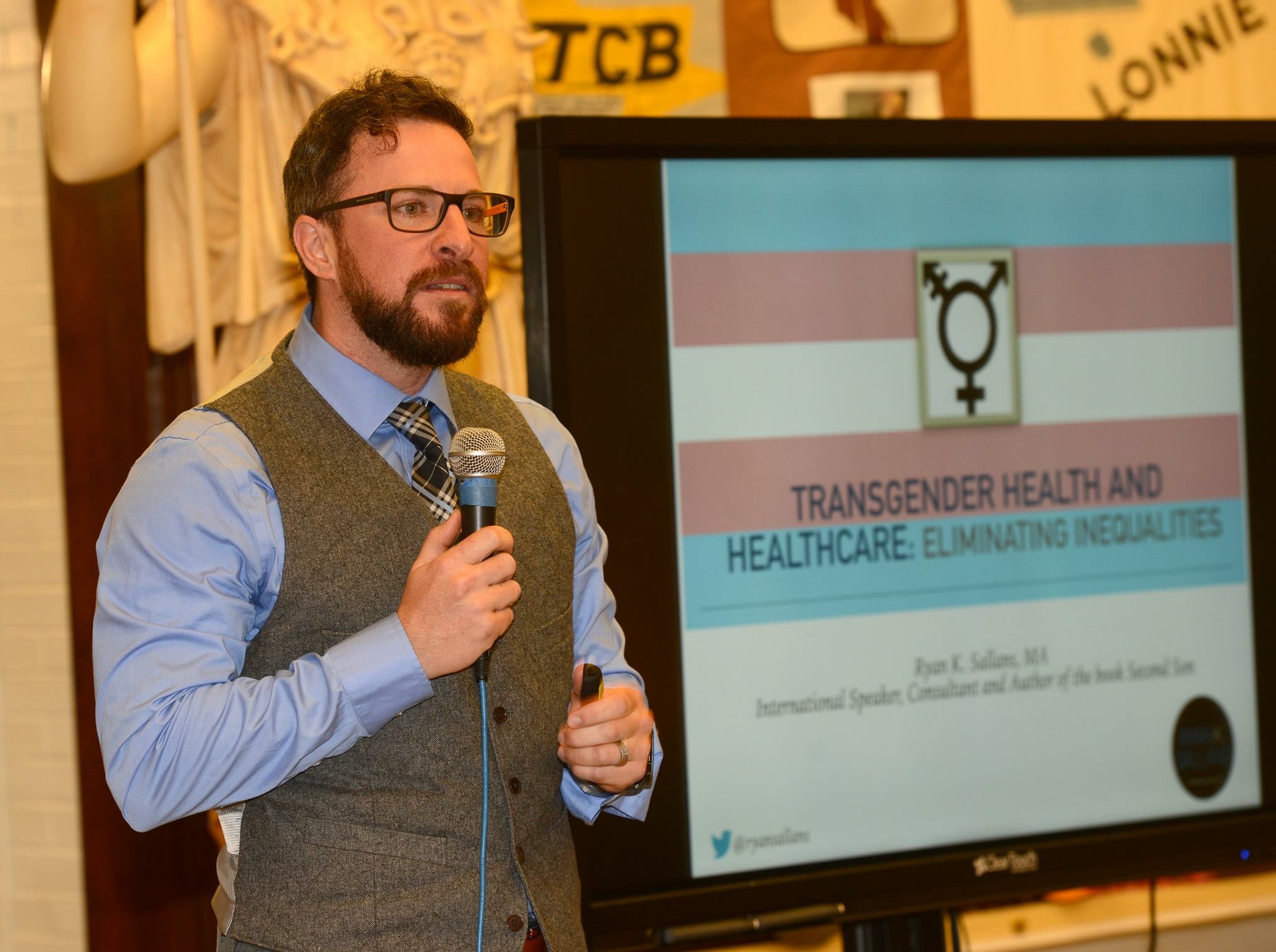 Ryan has extensive knowledge and experience assisting health serving agencies and people in providing compassionate, trauma-informed care for LGBTQ patients and beyond.

His work and teachings have assisted major healthcare institutions and nonprofits across the nation for almost twenty years. 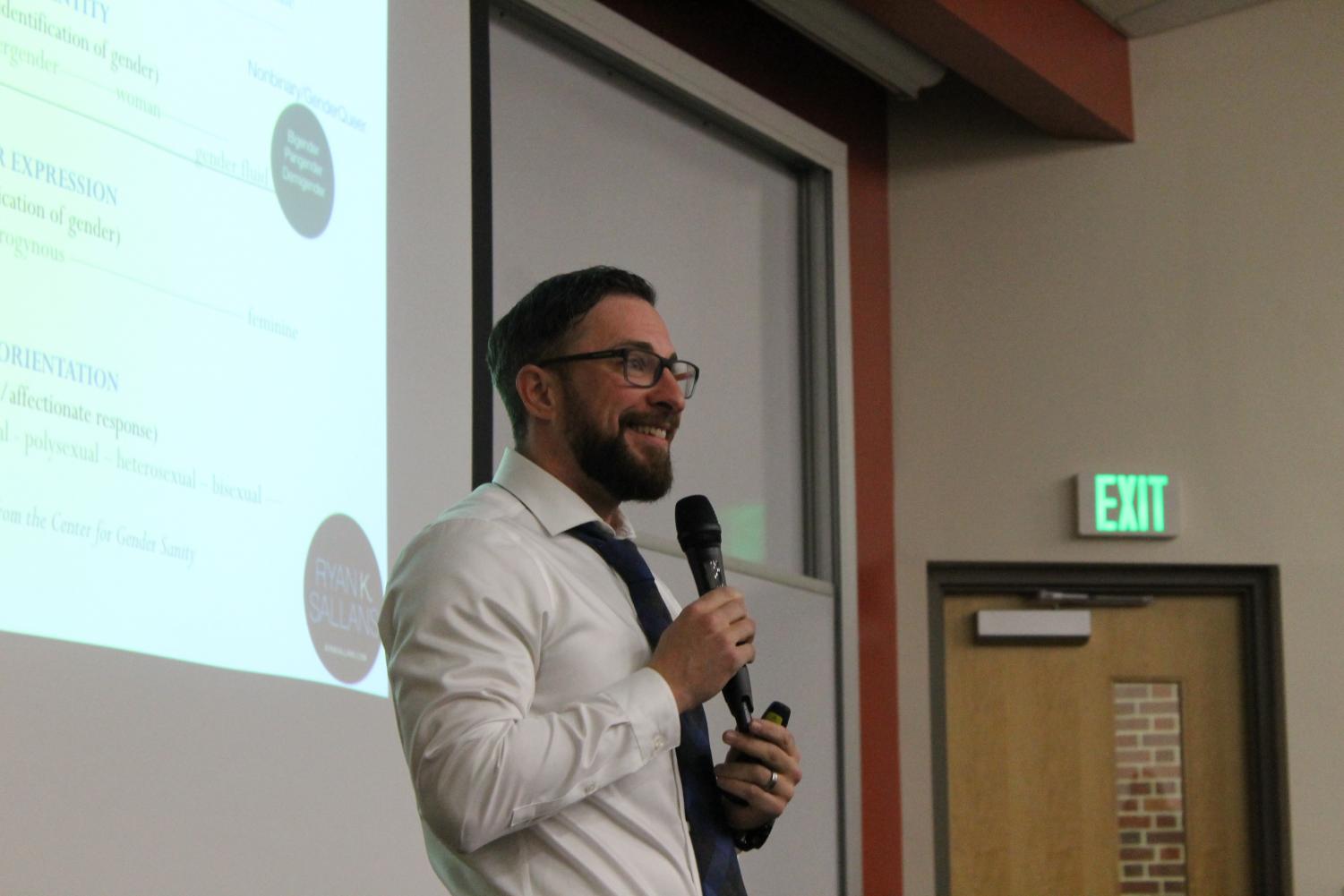 Working to build inclusive environments for transgender students and employees and raise awareness surrounding eating disorders and self confidence on over 100 campus events around the nation.

Through his unique approach to educational storytelling, Ryan is an engaging and inspirational transgender speaker for both professionals and students.

Ryan does not personally use an agent or speaker bureau agency for bookings. He prefers to build individual relationships with each client and customer that he serves. Please feel free to reach out with any inquiries into his work and future schedule by emailing him. 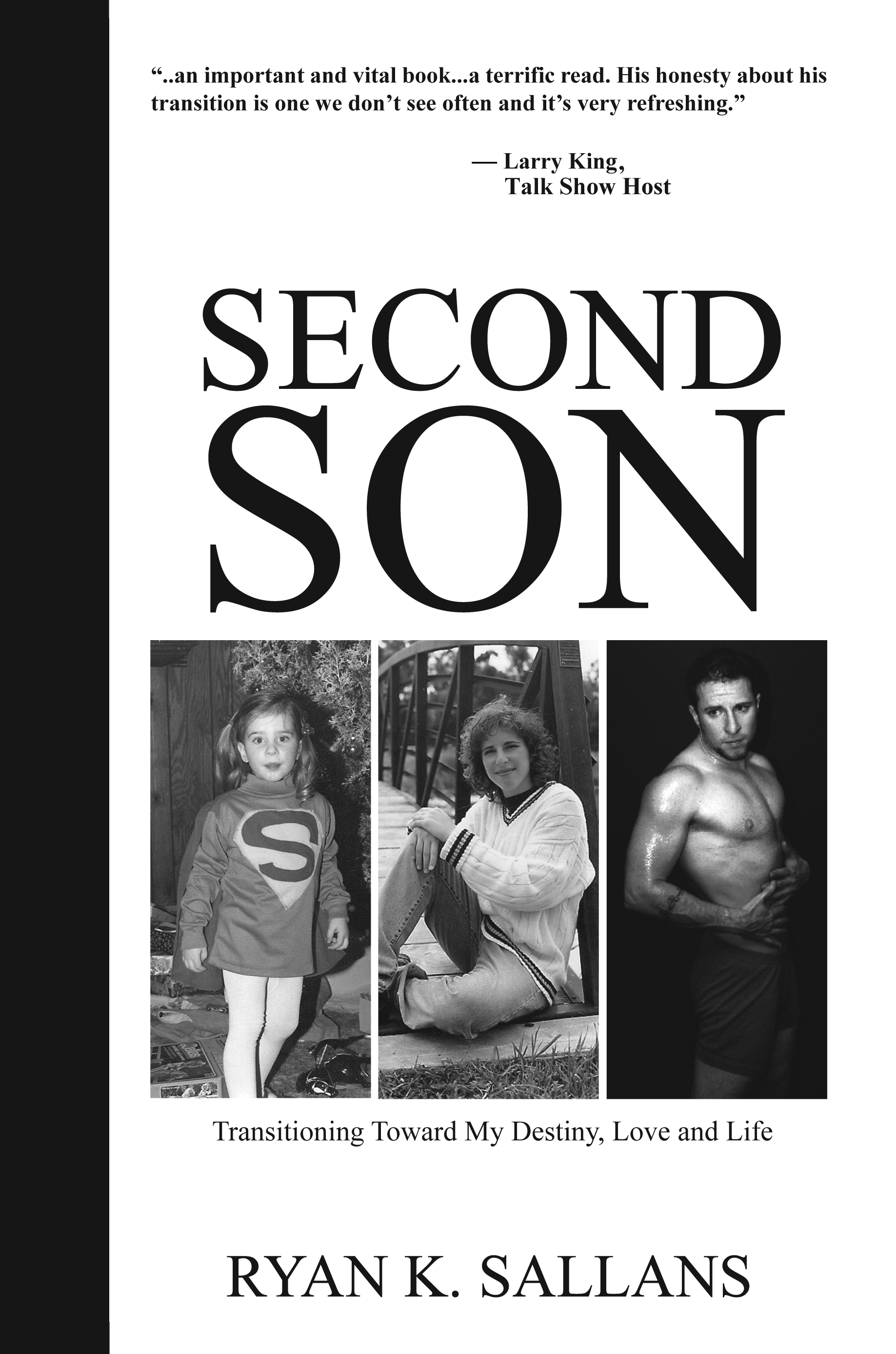 “Ryan Sallans is an incredibly brave young man who has written a powerful book. Second Son will save lives.” 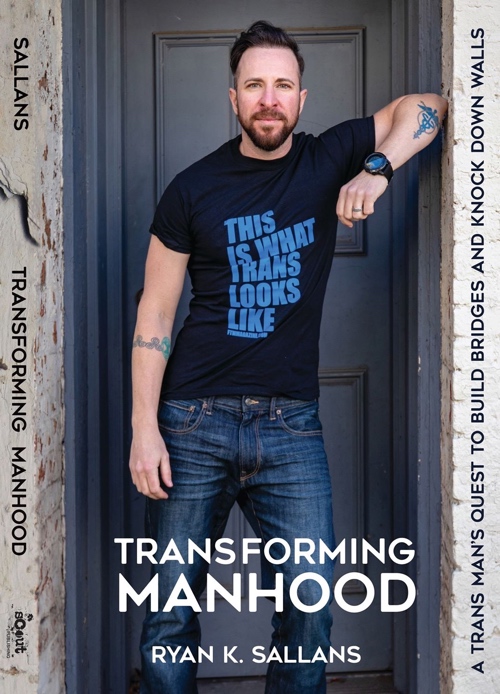 A thought-provoking look at life in contemporary America. While the term “trans” has become much more visible, the undercurrents of what it actually means still rumbles beneath the surface.

“With openness, empathy, brilliant insight, and a wide-angle lens, Sallans shares his personal journey from little girl to lesbian to trans man to human being. No other writer has come close to giving us a window into that evolutionary process.”

Ryan’s books are described as “must reads, that once you pick them up, you don’t want to put them back down.”

He is currently working on his third book, Finding Me: Finding We (Forthcoming, Scout Publishing).

His newest book will explore life beyond a transitional journey, by entering into Ryan’s soul-searching journey to finding self and community in modern-day America.

Interviews and Reviews for Transforming Manhood!

Ryan served six years as a board member for the Jim Collins Foundation. From 2018 to 2020, he stepped into the leadership role of vice president.

The Jim Collins Foundation is a national nonprofit organization fully-operated by volunteer board members. The mission of JCF is to provide gender-affirming surgical grants to individuals who would otherwise not have the financial resources to access these positive life-changing treatments.

Since 2011, JCF has awarded 32 surgical grants, with many of these covering 100% of the surgical fees. While Ryan served on the board, areas of key focus included internal and external communications and ongoing steps in building an inclusive and diverse board and grantee pool.

To learn more about the Foundation or to donate visit: JimCollinsFoundation.Org

Since 2005, Ryan has been a resource for people seeking to learn more about their own gender, the transition process, and navigating relationships.

Check out his videos, blogs, and recovery journals. 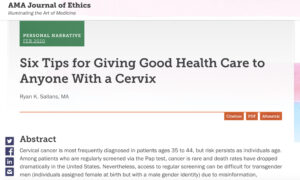 He has also served as lead author and subject matter expert for continuing education e-learning courses. These courses have to-date issued well over 1200 credit hours to licensed medical professionals across the US. 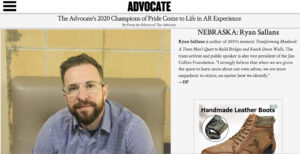 Ryan was featured in the Advocate’s 2020 Champions of Pride.

He was quoted by saying, “I strongly believe that when we are given the space to learn more about our own selves, we are more empathetic to others, no matter how we identify.”

Ryan’s mission is to continue to help facilitate the opening up of spaces, by bringing defenses down through a story.

About Ryan's Life and Transition

Ryan (still going by Kim when this was filmed) the day before he began taking steps in his physical transition from female to male.

Born in 1979, Ryan grew up in a small farming community in central Nebraska. From a very young age he was presented with challenges in life, however, the challenge that presented the most confusion was his growing realization that his body, in the form of the female sex, was not his gender.

In the 1980’s there wasn’t wide-spread information or research on what it means to be transgender. So he didn’t understand the confusion he was feeling, and why with each year that passed, he was more and more uncomfortable in his body, childhood home, and life.

While in college, Ryan worked as an outdoor adventure leader and backpacking course instructor. He was also the student coordinator/script writer for the peer educator group SHINE (Students Helping Individuals Nurture Esteem). And worked three years as the graduate assistant for the University Health Center’s Department of Health Education.

For most of his college years, Ryan struggled severely with the eating disorder, anorexia nervosa. His fight to live and figure out who he was, kept him going with an even deeper desire to learn everything he could about himself, his relationships, and life.

Ryan’s transition and professional career began in 2005. His first job as a health educator was created specifically for his qualifications and knowledge in human sexuality (specifically LGBTQ identities) eating disorders, and body image. Ryan became a tireless advocate for including transgender healthcare as part of the organization he worked for reproductive and sexual health services. He fine-tuned his knowledge in healthcare education and in 2011 launched his career as a self-employed speaker and author.

He is now a well-known name in the fields of inclusion, diversity and healthcare through the frame of gender. Ryan uses his storytelling, his transition from female to male, and his professional knowledge to assist in breaking down the barriers that gender presents us all.

Along with traveling around the world as a transgender speaker, Ryan is also an author of books, articles, and e-learning courses. His writing trains healthcare professionals around the nation on trauma-informed care. His most recent personal narrative was published in the February 2020 special issue of the American Medical Association’s Journal of Ethics.

Post the global pandemic, Ryan’s work will continue as an inspirational transgender speaker with a specialized focus on sexual orientation, gender and eating disorders, but he will now also be expanding his programming and content. This next decade he plans to help individuals and professionals in understanding healing from abuse, trauma and fractured relationships through building self-confidence (resiliency).