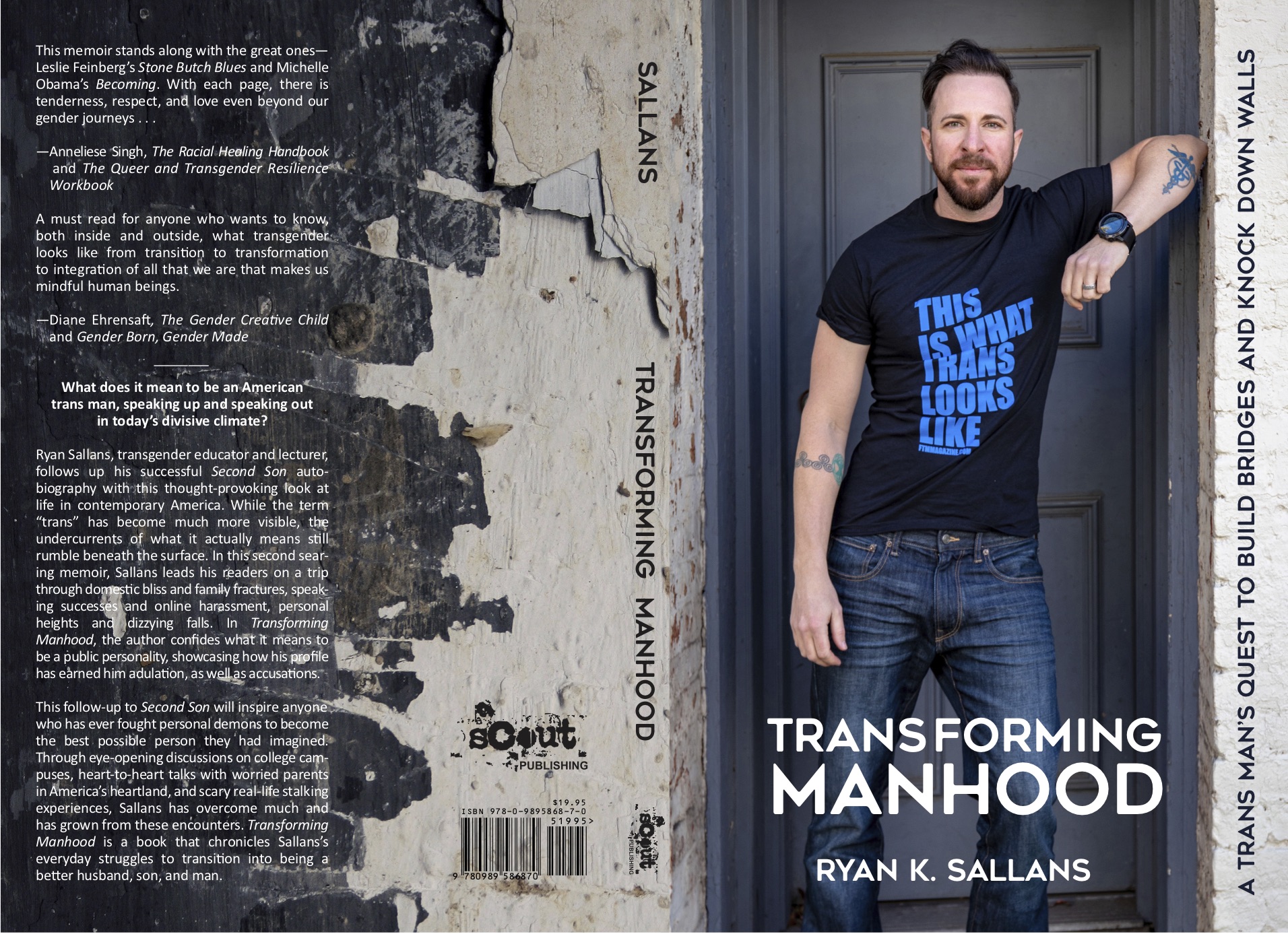 To read Ryan Sallans’ new memoir, Transforming Manhood: A Trans Man’s Quest to Build Bridges and Knock Down Walls, is to understand what it is to be a transgender man of Generation X, an activist sandwiched between the legendary (and, more often now, deceased) pioneers of the Baby Boomer generation and the Millennials. Does it matter? Most certainly.

Sallans expertly navigates what it means to be a 40-year-old today in a gender diverse community that’s so amorphous and rapidly changing that even highly visible trans activists can feel as though they’ve fallen out of favor, like shoulder pads and “Just Say No” billboards.

Sallans explores how language we use to define ourselves is constantly evolving; for trans folks today, that means a term of self-identity hard won just a couple decades prior (like transsexual) could be considered today’s slur. Even if it’s still the word you used when coming out, even if the sight of a rabble rousing “Transexual Menace” jacket today fills you with both pride and awe at how far we’ve come and the lives it took to get here.

While Gen Z is the group today most likely to identify as non-binary, gender diverse, or transgender, they too are redefining what those words mean and the social hierarchy in which they sit. And this hits Sallans a bit hard at times.

The author, who spent his adolescence battling self-esteem issues and an eating disorder (not realizing there were gender issues at the root), identified as a lesbian when he came out in the early 2000s. Later, the author realized he was a transgender man (hat tip to Loren Cameron, one of those Baby Boomer pioneers). That helped Sallans explain the variety of body issues he had battled and put his life in greater context. And though he was a feminist already (working at Planned Parenthood) and an LGBTQ activist, coming out as trans led him to speak about his own experiences at schools and colleges, conferences, LGBT community leaders, and businesses across the country. His first autobiography, Second Son, documented that process nearly a decade ago.

But in this new tome, Sallans is both steadfast and explorative, processing what activism and visibility mean today, from the shock of social media challengers to the changing priorities of gender diverse youth. When he’s questioned for being too binary (presumably because from a photo he can pass for a cisgender man), Sallans is alarmed. Not because he doesn’t want to elevate all trans and non-binary issues, but because after more than a decade of speaking tirelessly everywhere he’s been asked, living out as a trans man both digitally and in his home state of Nebraska (the Midwest hardly being a gender melting pot), and of working with (and serving as vice president of) the Jim Collins Foundation (a non-profit that helps trans people get gender-affirming treatment), Sallans worries that some think his voice no longer matters.

Sadly, that’s a churn any LGBTQ activist over 35 knows well. While we all know older, even senior, activists today that we still revere, the trans and queer movements are still youth-driven and what is de rigueur one moment is outdated the next. Sallans is just the latest to ride that wave and while entering middle age, question what it means.

That he does so with gracious aplomb while still offering a new vision for the future, is what sets Transforming Manhood apart as a must-read. Sallans falls in love and deals with sometimes mundane relationship issues, but he’s at his best while pleading with his own community to end acrimony and division, to be kind to one another, arguing that while 40% of trans people in one NTCE survey have attempted suicide at least once in their lives, supportive people can stop that. He makes a cognizant argument that the trans community is the only one that can inherently understand the struggles of trans people without them having to be explained. He says this as a Midwestern boy, chagrined at online bullying he sees and experiences.

But make no mistake, though he discusses love and loss, that terrifying stalker, of heckling and heartbreak and a high school reunion that surprises everyone, in Transforming Manhood, Sallans is mostly confronting his own legacy and his own death. While he confronts new fears (of saying or doing something that’s no longer politically woke), Sallans reflects on his trans heroes, those who influenced him greatly but whose names are a mystery to kids today. He wonders how long it will be —five years? ten years?—before nobody recognizes his name anymore as well.

Sallans doesn’t answer all the questions with Transforming Manhood. But he asks good ones, largely to himself but also to others his age (trans or not) that are undergoing the biggest transition of all. That dive into his own mortality will likely take him on a whole other ride, as bumpy and exhilarating as coming out did years ago. I’m thinking there will still be plenty of people who want to hear about it.

Diane Anderson-Minshall
Editorial Director of The Advocate
Author of Queerly Beloved: A Love Story Across Genders and four novels

How I Work Through Anxiety & Eating Recovery
April 17, 2020
It’s Time to Just Be Present and Talk About Feelings and Being Human
April 8, 2020
Finding Life and Meaning After A Global Pandemic and Economic Downturn in America
March 27, 2020
Transgender Day of Remembrance (TDOR)
November 20, 2017

Navigating Schools in this Time of Disruption for Transgender Youth
February 24, 2017
Now Booking for 2023
Ryan’s Blog
Tweets by @ryansallans
Go to Top