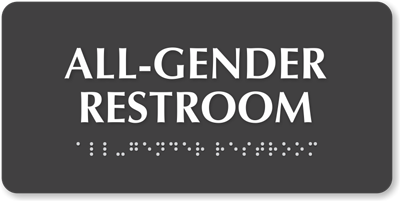 While finishing my graduate work in health behaviors and educational psychology, I never thought that as a professional trainer, the majority of my time would be spent talking with audiences about restrooms. Restrooms, the place every single human goes multiple times a day no matter your race, ethnicity, gender, or religion. When out and about town, in our workplaces, or at our schools, we can only hope that the restrooms we encounter are clean and smelling of pine aerosols instead of other not so comforting sights and smells.

I apologize for the slight digression. When speaking with audiences, I am not spending my time talking about which restrooms I would give five-stars on trip-advisor, I am spending my time talking about how hostile restroom environments can feel for transgender people, or people who simply do not fit within the tight confines of how our society deems men and women should look.

It is important to have conversations that dispel the concerns people may have when we talk about being transgender and accessing restroom facilities. As a transgender man, I’d like to think I am a good restroom mate – I keep my eyes to myself, I put the toilet lid back down if I have pushed it up (with my foot), and I use paper towels on the handles when washing my hands or opening the doors. Yet, if we were to listen to the current policymakers of our country, we would think I, along with all other transgender people, are the biggest threat to restroom culture in human history.

I am here to counteract two of the common statements these policymakers are using to try and restrict where transgender people can use facilities.

Ridiculous Statement Number One: Transgender people with genitals different than other genitals in a facility will assault the other people.

What I Would Like My Response to Be for Both: You gotta be fu**ing kidding me.

What I Have Composed My Response to Be for Statement Number One: Transgender people use the restroom for the exact same reasons any other person uses a restroom. We are not going into facilities to peek under the stalls, flash our genitals to the person that passes by, or any other off the wall reason people can list. A transgender person is not a sexual predator, yet this is the first thing people are suggesting we are when they argue that we should not use the restroom that aligns with our gender identity.

What I Have Composed My Response to Be for Statement Number Two: A person that says their gender identity is female to gain access to a restroom where they in turn spy on or assault a person, is not a transgender person. Also, let’s look at the facts to address the concerns around having a policy where people enter facilities based on gender identity instead of assigned birth sex. To date, there has not been an increase in sexual assaults in restrooms in any of the States, cities or counties that have passed a law or ordinance based on gender identity. There has also been a total of zero, yes zero, reports regarding a transgender person assaulting another person in a restroom across the United States. In fact, when we look at reports of assaults in restrooms, what has been reported are cisgender people attacking, harassing or assaulting transgender people, not the other way around.

In the past two days, bills in Virginia and Washington that would have discriminated against transgender people did not receive enough votes to move forward. We can only hope other bills like this will also lose momentum. In the meantime, I worry for the health of transgender people. This rhetoric adds another stressor in our already stressful lives.

As the world evolves and shifts past binary views of gender, it is time to end this attack on transgender people. It is time for policymakers to delink sexual predators from the word transgender. It is time for us to move forward with protections for people based on gender identity because the true threats in this country are the harming statements being made and the bills that further marginalize and promote discrimination against transgender people.

Navigating Schools in this Time of Disruption for Transgender Youth
February 24, 2017
Finding Trans-Inclusive Colleges and Universities for Your Child
January 27, 2017

Reflections from a Trans Man after Nine Years of Hormone Therapy
June 4, 2014
A Media Guide for Transgender Folk: Preparing for your interview
May 6, 2014
Upcoming Events
Ryan’s Blog
Tweets by @ryansallans
Go to Top