A Tide is Coming: The Shift of Transgender Narratives on TV

Over the past two months two incidents have happened that I believe will start to shift TV shows away from the typical questions and expected narratives of transgender people. The first happened when Laverne Cox and Carmen Carrera were interviewed on Katie Couric, and when Carmen was asked about surgery, Laverne interjected the importance of moving past asking about body parts and moving to “lived experiences”. In a statement after the show Laverne wrote on her blog:

“I am so deeply moved by the dialogues that are happening around my appearance with Carmen Carrera on “The Katie Show” on Monday. It is my dream that by highlighting the deep humanity of trans people’s lives in the media, elevating actual trans voices to speak the truth of our lived experiences in ways that don’t sensationalize and objectify us, those human voices and stories can be a part of the disruption needed to end the disproportionate injustices that threaten so many trans people’s lives, particularly the lives of trans women of color. It is a state of emergency for far too many trans people across this country. The stories of women like Islan Nettles and CeCe McDonald are far too commonplace in our community. I look forward to engaging in more dialogues about the complicated intersectional issues around these injustices and ways to make them a thing of the past. I am so grateful to Katie Couric and her show for the opportunity to highlight these important issues.”

The second incident that I believe will shift TV shows coverage happened last night after the airing of a Janet Mock interview on Piers Morgan. Janet immediately began tweeting her disappointment in the questions asked and the terms chosen to describe her. After the show in an interview with BuzzFeed she said:

“They’re not talking about my advocacy or anything like that, it’s just about this most sensationalized … meme of discussion of trans women’s lives: ‘We’re not real women, so therefore if we’re in relationships with men we’re deceiving them.’ So, it just feeds into those same kinds of myths and fears that they spread around, which leads to further violence of trans women’s bodies and identities.”

Tonight, there will be another panel discussing Janet’s reaction and how the twitterverse has exploded, which is important. It is important that there be conversations and not just reactions behind a keyboard.

Speaking from personal experience, I have been on several TV shows and have participated in dozens of interviews about my transition and my identity and can say, after most incidents I have felt off. Mostly because the same questions were asked, “How did you know?” “What was your name before?” “Have you had surgery?” “How do you go to the bathroom?” “Are you gay?” . . . etc.

The last two TV interviews I did on Trisha and Ricki Lake were ones I left feeling pretty good about, but the reasons for that was on Trisha, I did a lot of education with the producers before going on the show, and on Ricki I chose to steer my answers to questions away from my physical transition and toward my emotional journey.

Prior to that, the two times I was on Larry King Live, I didn’t know what I was doing, which resulted in taglines like this: 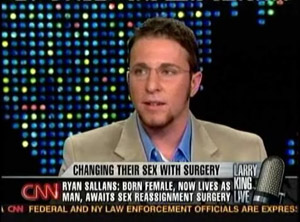 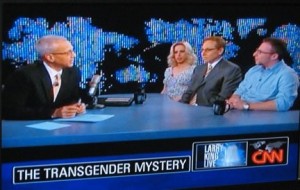 I’m not going to blame the show for these captions, in the past it was just assumed that this topic would be sensationalized and also, it is television. Besides PBS, I can’t think of a station that doesn’t have some twist. So the question is, will and can that change for national TV shows?

The tide is coming. Laverne and Janet have started the ball rolling and are opening up the discussion both online and on TV about what any of us who have been interviewed may have felt before. We need to move conversations about being transgender away from surgeries and assigned sex, and toward finding support, loving who we are, respecting those different from ourselves, and breaking down the barriers that we face just for being transgender. It is time to discuss the impact of discrimination, job inequities, familial support or lack thereof, impact of racism, access to healthcare and treatment in facilities, and the mental/physical health disparities that ensue from minority stress. And also to be able to show society that being transgender is just a part of a trans person’s identity, being transgender is not our whole identity.

I, for example, am a husband, a brother, son, dad to furry pets, publisher, author, speaker, carpenter by hobby and lover of nature.

I am not just a “guy who was born assigned female.”

I am not just trans, but sadly all other aspects of my identity may be impacted by the mistreatment experienced due to being transgender.

I believe the public will be just as interested, if not more, in these topics than what surgery a person has had or who they are dating. I believe the shift of these interviews will move us all forward and create more cheerful reviews in the future.

The challenge to doing this, especially on TV, is that the majority of our westernized society is ignorant about this topic and are clueless of the bigger issues that impact the transgender community, let alone the “physical transition” part. To begin to change this, the producers and the hosts have to do a lot of homework and learn about the deeper issues in order to be able to ask the appropriate questions and raise awareness among viewers. This will take time and require more resources for journalist. This will also require those being interviewed to still have to advocate for themselves (as we do for everything) and to educate the shows they are going on. I am not saying this is fair, but at the moment it is reality. In my opinion, this change will take time and require patience. It will require us to continue to have respectful dialogues and to hold conversations that do not move toward defense/offense, which is difficult to do if we keep these conversations online and use our keyboards to do the attacking.

How I Work Through Anxiety & Eating Recovery
April 17, 2020
It’s Time to Just Be Present and Talk About Feelings and Being Human
April 8, 2020
Using the Pandemic as a Time for Introspection
April 1, 2020
Finding Life and Meaning After A Global Pandemic and Economic Downturn in America
March 27, 2020